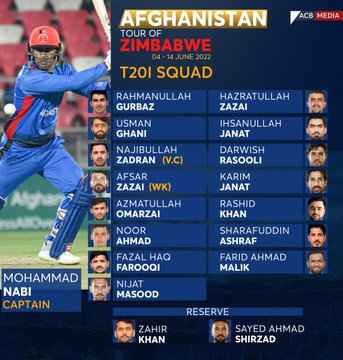 The Afghanistan national cricket team will travel Zimbabwe in 2022 to compete in ODI and T20 series. The Afghan Cricket Board has confirmed the ODI and T20 squads for the tour.

The Afghanistan Cricket Board (ACB) issued a statement announcing two unique squads for the limited overs series (ODI and T20). Mohammad Nabi, an all-rounder, is leading the T20 squad. In contrast, Hashmatullah Shahidi is in charge of the ODI squad.

Mujib Ur Rahman and Kais Ahmed are not typical T20 players. Gulbedin Naib has been removed from the ODI squad named. Today, the Afghanistan cricket team departed for its 2022 tour of Zimbabwe. From June 4 to 14, a total of eight matches of the two series will be contested at the Harare Sports Ground in Zimbabwe.