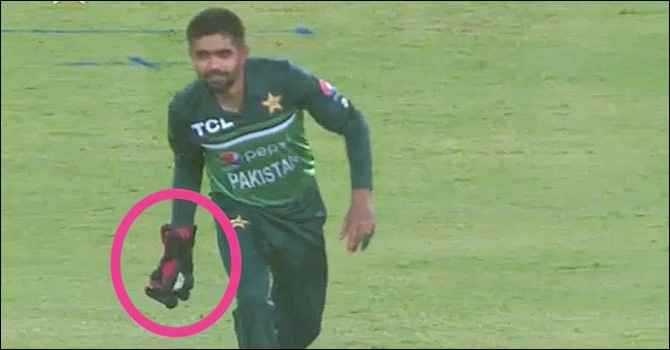 During the second ODI between Pakistan and the West Indies, an incident occurred. Friday, the West Indies face Pakistan in Multan (June 10). The error was made by Babar Azam in the 29th over of the West Indies’ innings. Not just mistakes, but rare mistakes.

After Mohammad Nawaz bowled the first ball of the 29th over, Aljari Joseph, a batsman from the West Indies, took the run. Mohammad Rizwan, the wicketkeeper, tossed his gloves on the ground while fielding and sprinting behind the ball.

Babar succeeded Chhota Mohammad Rizwan as captain of the team. The gloves of Rizwan were laying on the ground after his eyes. The Pakistan captain took up and fielded this ball. Which is contrary to the cricket law.

The event was observed by the umpire, who therefore assessed Pakistan a five-run penalty. Article 27.1 of the Rules of Cricket prohibits anybody other than the wicketkeeper from wearing gloves or leg protectors when fielding. Babar committed that error.

In 2013, Andrew Hall and in 2016, Matt Renesh caused a similar situation in domestic cricket, and the team was fined. The West Indies were unable to win the match after being penalised five runs for Babur’s wellbeing. Pakistan won the series by claiming victory against them.