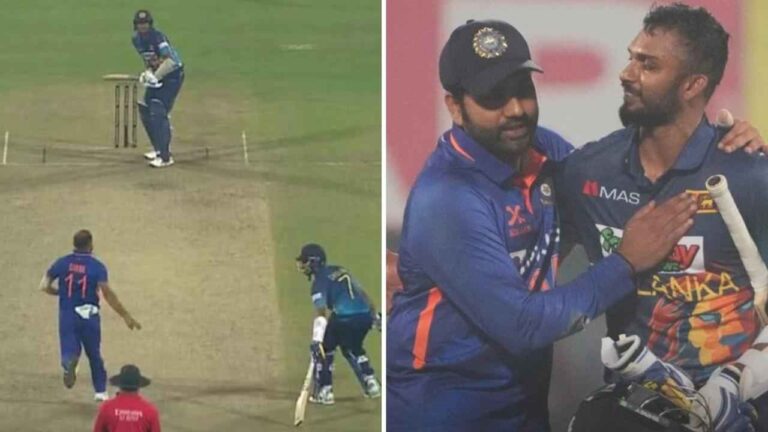 Indian pacer Mohammad Shami mankaed Sri Lankan captain Dasun Shanaka at the non striker’s end but Rohit Sharma withdraws the out appeal. Shanaka was batting on 98* runs, however the Indian captain retracted his appeal for an out.

Dasun Shanaka was batting on 98 runs. Three balls remain. But Kasun Rajitha is batting. Shanaka, the Sri Lankan captain, is positioned at the non-striking end. Just then, Shami extracted Shanaka with a spider. But Rohit Sharma did not allow this to occur. The appeal was withdrawn by the Indian captain.

The event occurred during the final over of the game. Shanaka was batting quickly before to that. He was approaching 100 years old. Before Shami bowls, Shanaka leaves the crease to proceed to the hitting end. As a result, Mankad was sacked by Shami. He applied as well. The field umpire makes a challenge to the third umpire.

Then, Rohit Sharma stepped forward and speaks with Mohammad Shami; He then approached the umpire to withdraw the out appeal. Shanaka was therefore not out. Shanaka reached his century on the sixth delivery of the over.

After the match, Rohit discussed it. He stated, “I was unaware that Shami had requested an exit. Shanaka was hitting really well. I didn’t want to put him out like that for 98 runs. I could not extract Shanaka as I desired. He merited this millennium. I thus withdraw my application.”