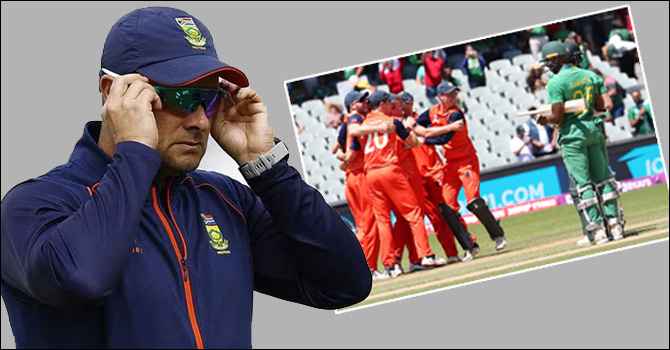 South Africa head coach Mark Boucher is taking the responsibility of being knocked out of the World Cup after losing to the Netherlands quoting as a worst defeat of his coaching career.

At the end of the T20 World Cup group stage games, the four teams that have confirmed the semi-finals have been finalized. However, the game of the group stage is not over yet, various analyzes are going on.

In the last match of the group stage held in Adelaide on Sunday (November 6), the Dutch surprisingly lost to South Africa, and India secured the semi-final from Group-2 . The Proteas lost to the Netherlands by 13 runs.

A new surprise in the tournament. The Proteas were thought to be favorites to win the tournament, but they are now on their way home after losing to the Dutch. As a result, South Africa’s expectation of winning the white ball World Cup has increased.

“We were weak at the beginning of the match,” said Boucher, who was extremely disappointed after such a loss. But got a good team. We believe we can beat any team on our day. Therefore, I would like to say that it is disappointing for the team to leave the tournament in this condition.”

As for the reason, he said, “South Africa as a team expects better. We have ourselves to blame, but I think our T20 team is in a good position.”

Boucher, 45, called the defeat to the Netherlands the worst of his career. “Looking at the beginning of the match, you can understand that we were weak,” he said.

The Netherlands collected 158 runs for 4 wickets in the scheduled 20 overs with the help of man of the match Colin Ackerman’s unbeaten 41 runs. In response, South Africa lost Khey in front of Dutch fast bowler Brendan Glover’s eye-catching performance. The Proteas were reduced to 145 runs after losing 8 wickets. Brendan took 3 wickets with 9 runs after bowling 2 overs.

After such a loss, Proteas captain Temba Bavuma said, “It’s hard to digest. We had confidence and belief in ourselves that we can play the semi-final as a team. We lost wickets at crucial moments. They fielded better than us.”